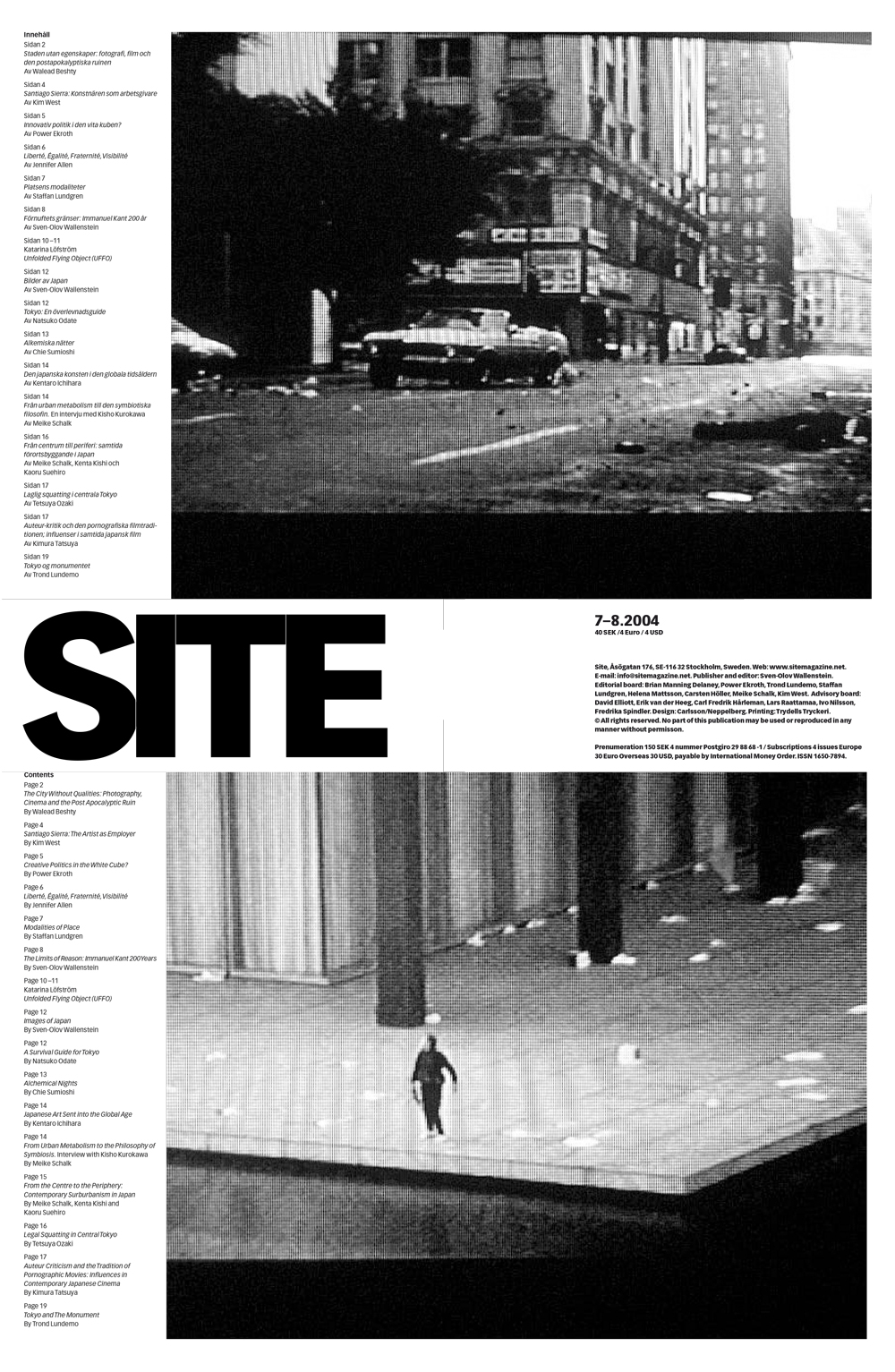 In 1967, Ed Ruscha hired a pilot and a photographer to make images of what is arguably the most banal urban location. From a mile up, Ruscha dwarfed Los Angeles, recording a vision of the car-infested metropolis through the bombardier’s scope. The resulting book, Thirty Four Parking Lots (1967), confronts us with something between the formal repetition of serial geometry and aerial reconnaissance of urban sprawl, as if enormous Sol Le- Witt wall drawings had somehow found their way into these cluttered landscapes.

In a 1976 interview, Ruscha related his interest in this bird’s-eye view to a childhood desire to build a scale model of all of the houses on his earlymorning paper route, a model he could ”study like an architect standing over a table planning a city.”1 It was the emptiness of his neighborhood streets at dawn that inspired the young Ruscha’s fantasy, and subsequently found its form in the one restriction he placed on these pictures: that only completely empty lots be photographed. His aerial views of these mundane necessities of contemporary car culture propose an expansive landscape of desolately sprawling interstitial spaces: an endless maze of deserted parking lots, vacant thoroughfares, and evacuated strip malls. Ruscha’s images invite an uncanny imagining of these sites; a world where the vernacular is devoid of life, they place the cold angularity of minimalist aesthetics back into an urban milieu, forcing the esoteric investigation of seriality and the grid into the social field.

The City Without Qualities: Cinema and the PostApocalyptic Ruin
By Walead Beshty

Santiago Sierra: The Artist as Employer
By Kim West

Creative Politics in the White Cube?
By Power Ekroth

Modalities of Place
By Staffan Lundgren

The Limits of Reason:
Immanuel Kant 200 years
By Sven-Olov Wallenstein

Images of Japan
By Sven-Olov Wallenstein

A Survival Guide for Tokyo
By Natsuko Odate

Japanese Art Sent into the Global Age
By Kentaro Ichihara

From Urban Metabolism to the Philosophy of Symbiosis. Interview with Kisho Kurokawa
By Meike Schalk

From the Centre to the Periphery: Contemporary Suburbanism in Japan
By Meike Schalk, Kenta Kishi and Kaoru Suehiro

Auteur Criticism and the Tradition of Pornographic Movies: Influences in ontemporary Japanese Cinema
By Kimura Tatsuya

Tokyo and The Monument
By Trond Lundemo