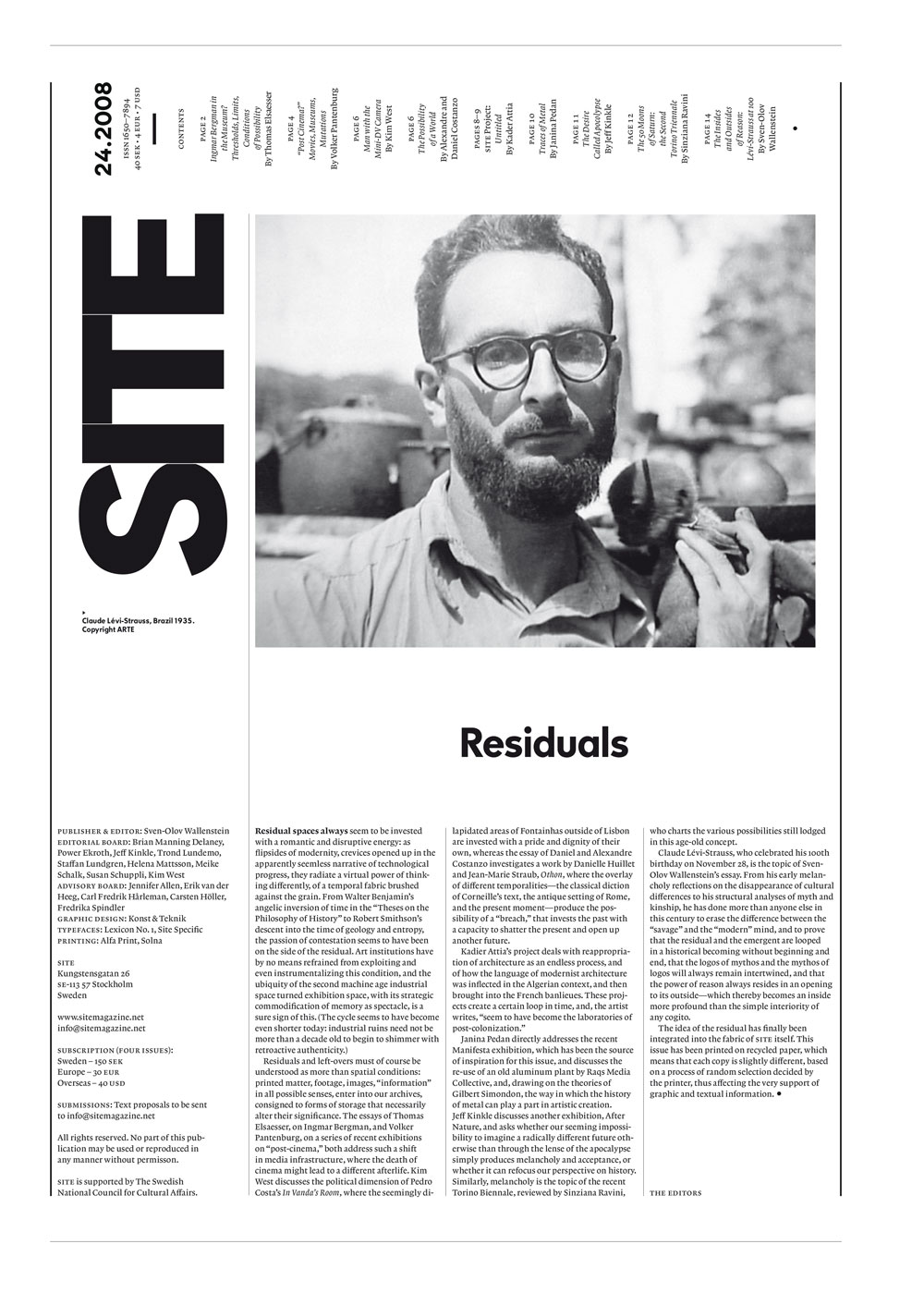 Residual spaces always seem to be invested with a romantic and disruptive energy: as flipsides of modernity, crevices opened up in the apparently seemless narrative of technological progress, they radiate a virtual power of thinking differently, of a temporal fabric brushed against the grain. From Walter Benjamin’s angelic inversion of time in the “Theses on the Philosophy of History” to Robert Smithson’s descent into the time of geology and entropy, the passion of contestation seems to have been on the side of the residual. Art institutions have by no means refrained from exploiting and even instrumentalizing this condition, and the ubiquity of the second machine age industrial space turned exhibition space, with its strategic commodification of memory as spectacle, is a sure sign of this. (The cycle seems to have become even shorter today: industrial ruins need not be more than a decade old to begin to shimmer with retroactive authenticity.)

Residuals and left-overs must of course be understood as more than spatial conditions: printed matter, footage, images, “information” in all possible senses, enter into our archives, consigned to forms of storage that necessarily alter their significance. The essays of Thomas Elsaesser, on Ingmar Bergman, and Volker Pantenburg, on a series of recent exhibitions on “post-cinema,” both address such a shift in media infrastructure, where the death of cinema might lead to a different afterlife. Kim West discusses the political dimension of Pedro Costa’s In Vanda’s Room, where the seemingly dilapidated areas of Fontainhas outside of Lisbon are invested with a pride and dignity of their own, whereas the essay of Daniel and Alexandre Costanzo investigates a work by Danielle Huillet and Jean-Marie Straub, Othon, where the overlay of different temporalities—the classical diction of Corneille’s text, the antique setting of Rome, and the present moment—produce the possibility of a “breach,” that invests the past with a capacity to shatter the present and open up another future.

Kadier Attia’s project deals with reappropriation of architecture as an endless process, and of how the language of modernist architecture was inflected in the Algerian context, and then brought into the French banlieues. These projects create a certain loop in time, and, the artist writes, “seem to have become the laboratories of post-colonization.”

Janina Pedan directly addresses the recent Manifesta exhibition, which has been the source of inspiration for this issue, and discusses the re-use of an old aluminum plant by Raqs Media Collective, and, drawing on the theories of Gilbert Simondon, the way in which the history of metal can play a part in artistic creation. Jeff Kinkle discusses another exhibition, After Nature, and asks whether our seeming impossibility to imagine a radically different future otherwise than through the lense of the apocalypse simply produces melancholy and acceptance, or whether it can refocus our perspective on history. Similarly, melancholy is the topic of the recent Torino Biennale, reviewed by Sinziana Ravini, who charts the various possibilities still lodged in this age-old concept.

Claude Lévi-Strauss, who celebrated his 100th birthday on November 28, is the topic of Sven- Olov Wallenstein’s essay. From his early melancholy reflections on the disappearance of cultural differences to his structural analyses of myth and kinship, he has done more than anyone else in this century to erase the difference between the “savage” and the “modern” mind, and to prove that the residual and the emergent are looped in a historical becoming without beginning and end, that the logos of mythos and the mythos of logos will always remain intertwined, and that the power of reason always resides in an opening to its outside—which thereby becomes an inside more profound than the simple interiority of any cogito.

The idea of the residual has finally been integrated into the fabric of site itself. This issue has been printed on recycled paper, which means that each copy is slightly different, based on a process of random selection decided by the printer, thus affecting the very support of graphic and textual information.

Ingmar Bergman in the Museum? Thresholds, Limits, Conditions of Possibility
By Thomas Elsaesser

Man with the Mini-DV Camera
By Kim West

The Possibility of a World
By Alexandre and Daniel Costanzo

Traces of Metal
By Janina Pedan

The 50 Moons of Saturn: the Second Torino Triennale
By Sinziana Ravini

The Insides and Outsides of Reason: Lévi-Strauss at 100
By Sven-Olov Wallenstein