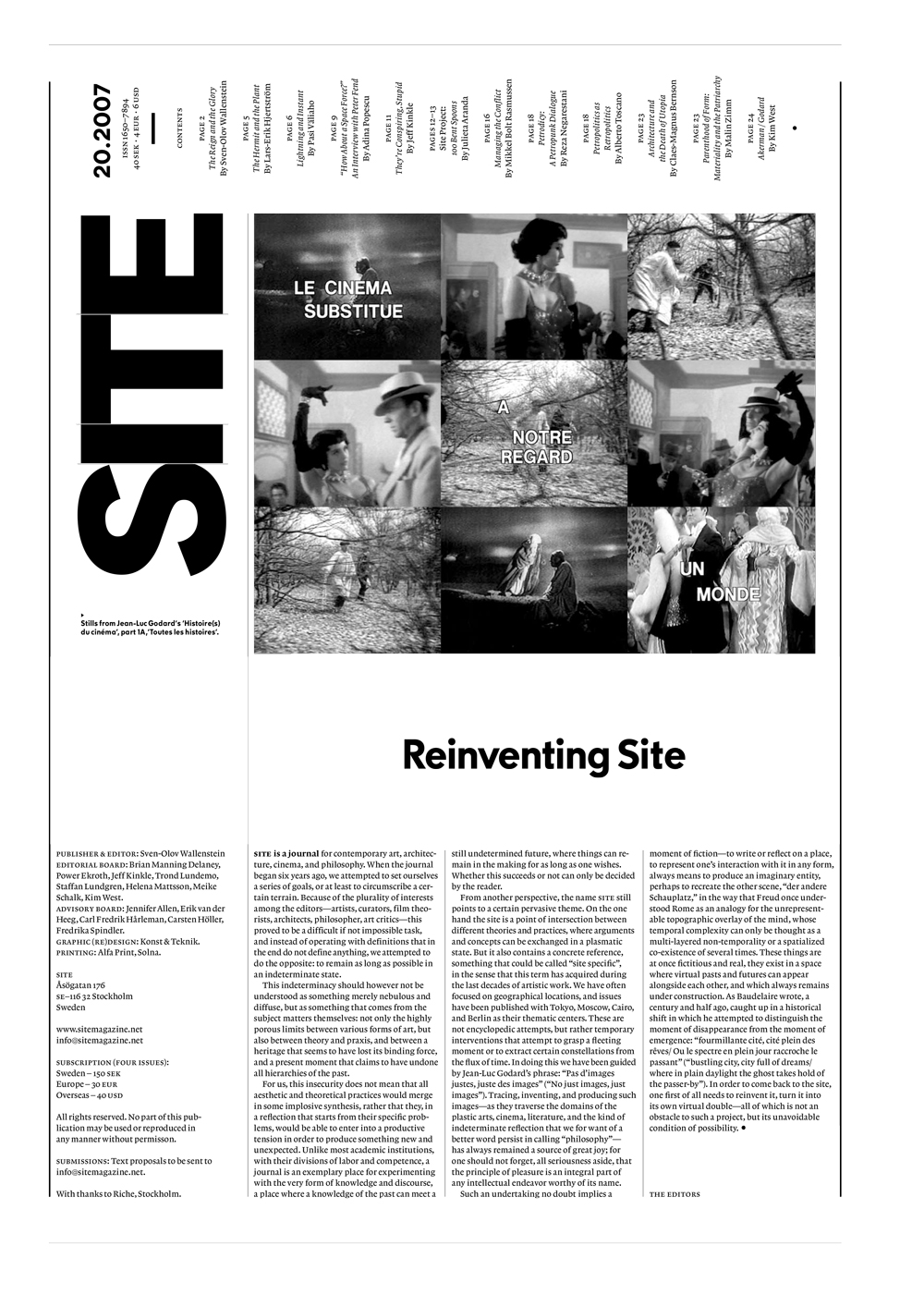 Site is a journal for contemporary art, architecture, cinema, and philosophy. When the journal began six years ago, we attempted to set ourselves a series of goals, or at least to circumscribe a certain terrain. Because of the plurality of interests among the editors —artists, curators, film theorists, architects, philosopher, art critics— this proved to be a difficult if not impossible task, and instead of operating with definitions that in the end do not define anything, we attempted to do the opposite: to remain as long as possible in an indeterminate state.

This indeterminacy should however not be understood as something merely nebulous and diffuse, but as something that comes from the subject matters themselves: not only the highly porous limits between various forms of art, but also between theory and praxis, and between a heritage that seems to have lost its binding force, and a present moment that claims to have undone all hierarchies of the past.

For us, this insecurity does not mean that all aesthetic and theoretical practices would merge in some implosive synthesis, rather that they, in a reflection that starts from their specific problems, would be able to enter into a productive tension in order to produce something new and unexpected. Unlike most academic institutions, with their divisions of labor and competence, a journal is an exemplary place for experimenting with the very form of knowledge and discourse, a place where a knowledge of the past can meet a still undetermined future, where things can remain in the making for as long as one wishes. Whether this succeeds or not can only be decided by the reader.

From another perspective, the name site still points to a certain pervasive theme. On the one hand the site is a point of intersection between different theories and practices, where arguments and concepts can be exchanged in a plasmatic state. But it also contains a concrete reference, something that could be called “site specific”, in the sense that this term has acquired during the last decades of artistic work. We have often focused on geographical locations, and issues have been published with Tokyo, Moscow, Cairo, and Berlin as their thematic centers. These are not encyclopedic attempts, but rather temporary interventions that attempt to grasp a fleeting moment or to extract certain constellations from the flux of time. In doing this we have been guided by Jean-Luc Godard’s phrase: “Pas d’images justes, juste des images” (“No just images, just images”). Tracing, inventing, and producing such images–as they traverse the domains of the plastic arts, cinema, literature, and the kind of indeterminate reflection that we for want of a better word persist in calling “philosophy”– has always remained a source of great joy; for one should not forget, all seriousness aside, that the principle of pleasure is an integral part of any intellectual endeavor worthy of its name.

Such an undertaking no doubt implies a moment of fiction–to write or reflect on a place, to represent one’s interaction with it in any form, always means to produce an imaginary entity, perhaps to recreate the other scene, “der andere Schauplatz,” in the way that Freud once understood Rome as an analogy for the unrepresentable topographic overlay of the mind, whose temporal complexity can only be thought as a multi-layered non-temporality or a spatialized co-existence of several times. These things are at once fictitious and real, they exist in a space where virtual pasts and futures can appear alongside each other, and which always remains under construction. As Baudelaire wrote, a century and half ago, caught up in a historical shift in which he attempted to distinguish the moment of disappearance from the moment of emergence: “fourmillante cité, cité plein des rêves/ Ou le spectre en plein jour raccroche le passant” (“bustling city, city full of dreams/ where in plain daylight the ghost takes hold of the passer-by”). In order to come back to the site, one first of all needs to reinvent it, turn it into its own virtual double_all of which is not an obstacle to such a project, but its unavoidable condition of possibility.

The Reign and the Glory
By Sven-Olov Wallenstein

The Hermit and the Plant
By Lars-Erik Hjertström

Lightning and Instant
By Pasi Väliaho

“How About a Space Force?”: An Interview with Peter Fend
By Adina Popescu

Architecture and the Death of Utopia
By Claes-Magnus Bernson

Parenthood of Form: Materiality and the Patriarchy
By Malin Zimm