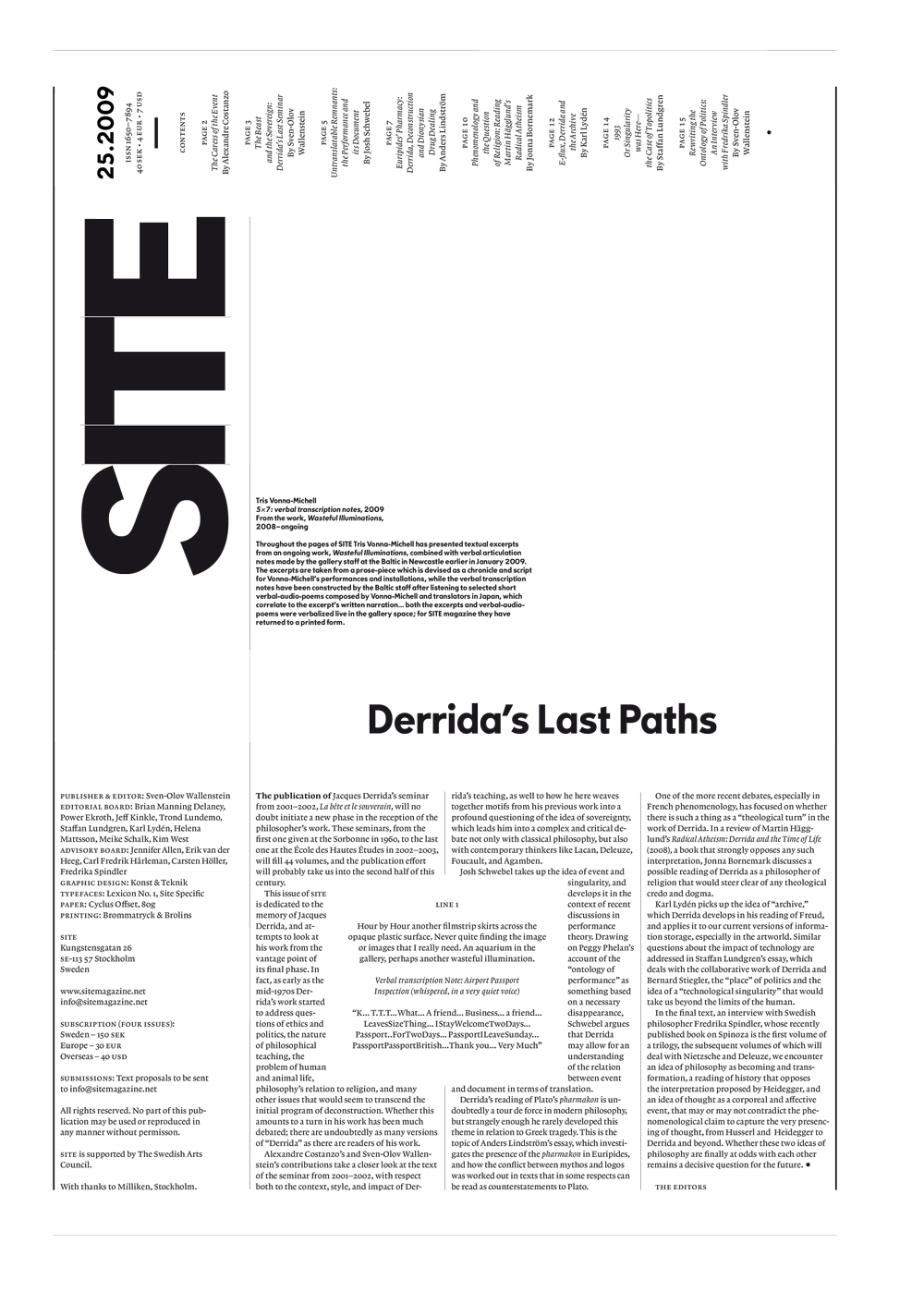 The publication of Jacques Derrida’s seminar from 2001–2002, La bête et le souverain, will no doubt initiate a new phase in the reception of the philosopher’s work. These seminars, from the first one given at the Sorbonne in 1960, to the last one at the École des Hautes Études in 2002–2003, will fill 44 volumes, and the publication effort will probably take us into the second half of this century. This issue of site is dedicated to the memory of Jacques Derrida, and attempts to look at his work from the vantage point of its final phase. In fact, as early as the mid-1970s Derrida’s work started to address questions of ethics and politics, the nature of philosophical teaching, the problem of human and animal life, philosophy’s relation to religion, and many other issues that would seem to transcend the initial program of deconstruction. Whether this amounts to a turn in his work has been much debated; there are undoubtedly as many versions of “Derrida” as there are readers of his work.

Alexandre Costanzo’s and Sven-Olov Wallen-stein’s contributions take a closer look at the text of the seminar from 2001–2002, with respect both to the context, style, and impact of Derrida’s teaching, as well to how he here weaves together motifs from his previous work into a profound questioning of the idea of sovereignty, which leads him into a complex and critical debate not only with classical philosophy, but also with contemporary thinkers like Lacan, Deleuze, Foucault, and Agamben.

Josh Schwebel takes up the idea of event and singularity, and develops it in the context of recent discussions in performance theory. Drawing on Peggy Phelan’s account of the “ontology of performance” as something based on a necessary disappearance, Schwebel argues that Derrida may allow for an understanding of the relation between event and document in terms of translation.

Derrida’s reading of Plato’s pharmakon is undoubtedly a tour de force in modern philosophy, but strangely enough he rarely developed this theme in relation to Greek tragedy. This is the topic of Anders Lindström’s essay, which investigates the presence of the pharmakon in Euripides, and how the conflict between mythos and logos was worked out in texts that in some respects can be read as counterstatements to Plato.

One of the more recent debates, especially in French phenomenology, has focused on whether there is such a thing as a “theological turn” in the work of Derrida. In a review of Martin Hägg-lund’s Radical Atheism: Derrida and the Time of Life (2008), a book that strongly opposes any such interpretation, Jonna Bornemark discusses a possible reading of Derrida as a philosopher of religion that would steer clear of any theological credo and dogma.

Karl Lydén picks up the idea of “archive,” which Derrida develops in his reading of Freud, and applies it to our current versions of information storage, especially in the artworld. Similar questions about the impact of technology are addressed in Staffan Lundgren’s essay, which deals with the collaborative work of Derrida and Bernard Stiegler, the “place” of politics and the idea of a “technological singularity” that would take us beyond the limits of the human.

In the final text, an interview with Swedish philosopher Fredrika Spindler, whose recently published book on Spinoza is the first volume of a trilogy, the subsequent volumes of which will deal with Nietzsche and Deleuze, we encounter an idea of philosophy as becoming and transformation, a reading of history that opposes the interpretation proposed by Heidegger, and an idea of thought as a corporeal and affective event, that may or may not contradict the phenomenological claim to capture the very presencing of thought, from Husserl and Heidegger to Derrida and beyond. Whether these two ideas of philosophy are finally at odds with each other remains a decisive question for the future.

The Caress of the Event
By Alexandre Costanzo

The Beast and the Sovereign: Derrida’s Last Seminar
By Sven-Olov Wallenstein

Untranslatable Remnants: the Performance and its Document
By Josh Schwebel

E-flux, Derrida and the Archive
By Karl Lydén

Rewriting the Ontology of Politics: An Interview with Fredrika Spindler
By Sven-Olov Wallenstein