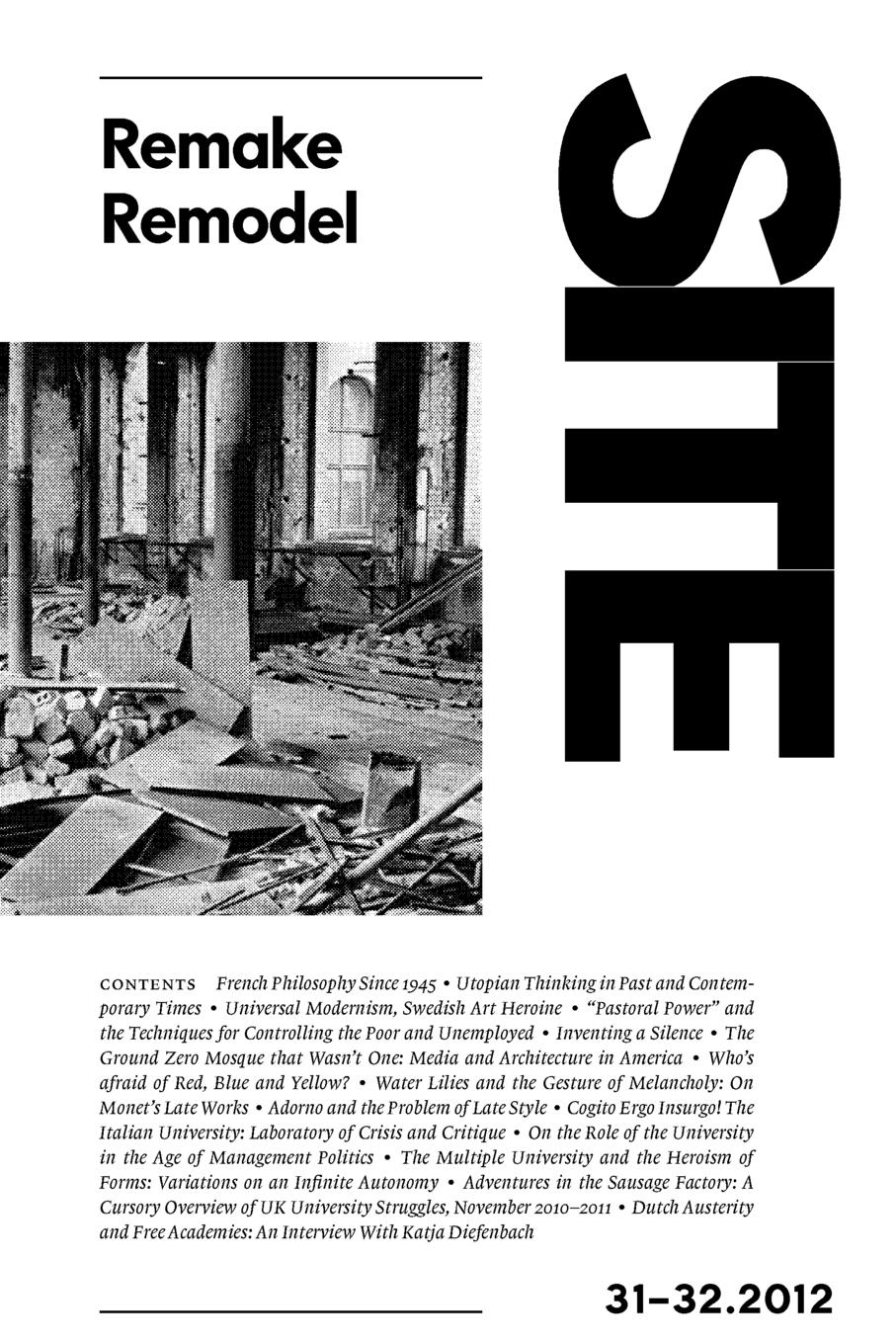 This is the new version of site. Since the most recent issue, no. 29–30 (2010), we have had to cope with the difficult problem of having our funding from the Swedish Cultural Council reduced by two thirds. While for decades this government body has been a major and generous source for Swedish cultural journals, and has made it possible for a small country like Sweden to sustain a highly diverse publication ecology, recent shifts seem to introduce a different policy.

The drastic cuts were made for reasons that to us appeared obscure: the official explanation cannot be deemed as anything but intellectually vacuous — the funding was cut down because of the journal’s “low quality,” a judgment not accompanied by any further exemplifications or explanations.

Since then we have been forced to remake and remodel our way of working, which as such need not be a negative thing. Instead of publishing in a tabloid format, we have switched to a more booklike format that makes it possible to continue international distribution in a more efficient way, and in the end hopefully makes the journal easier to buy for readers inside, as well as outside, of Sweden. SITE will henceforth be available from most Internet booksellers, selected bookstores, and will be easy to order in those who will not keep us in stock.

The necessity of remaking and remodeling is however not restricted to journals. In recent years the European university system has been affected by major changes due to financial restrictions and policy changes that seem to directly target teaching and research in the humanities. This is no doubt a global trend, and the major thematic section, “Quality Education,” with contributions by Karl Lydén, Kim West, Sara Farris, Hans Ruin, Stéphane Douailler, Danny Hayward, and Katja Diefenbach, addresses this problem as it has emerged in different national contexts.

In the UK, Italy, Austria, France, Germany, Greece, Spain, and in virtually every country in Europe, the Bologna Process seems to have produced a general quantification of higher learning along with restricted academic freedom and worsened labor conditions for professors, lecturers, and university employees at large. As was already presaged in Lyotard’s classic analysis in the late ’70s, the grand narratives of legitimation of education have lost their credibility in contemporary, post-industrial society: both the narrative of knowledge as a means of emancipation, and the German Idealist narrative of Bildung, have vanished, and legitimation seems to only reside in performativity, resulting in the mercantilization of higher learning. The question remains not only of how such a process may be resisted — for instance by a kind of passive resistance: minimize your attention, just send in the report — but also the question to what extent these transformations, deeply imbricated as they are in mutations of Capital itself, also open other possibilities.

A smaller thematic section is devoted to the idea of “late style,” and presents texts by Sam Smiles, Bente Larsen, and Sven-Olov Wallenstein. Initially presented at a symposium at Moderna Museet in Stockholm, organized in conjunction with the exhibition “Turner Monet Twombly: Later Paintings,” they examine the idea of late style, as it has been developed by, among others, Theodor W. Adorno and Edward Said, both in relation to the three artists, and as a general question of philosophy and aesthetic theory.

This issue also contains essays by Charlotte Bydler, Sinziana Ravini, Fredrika Spindler, Maurizio Lazzarato, Alex Costanzo, and Joel McKim. The topics addressed range from the Swedish artist Barbro Östlihn’s work in New York in the 1960s, utopias in contemporary art, and the writing of the history of post-war French philosophy, to deployment of pastoral power technologies in French politics, the cinematic work of Wang Bing, and the debates surrounding the construction of an Islamic cultural center close to Ground Zero in lower Manhattan.

French Philosophy Since 1945
By Fredrika Spindler

Utopian Thinking in Past and Contemporary Times
By Sinziana Ravini

Inventing a Silence
By Alexandre Costanzo

The Ground Zero Mosque That Wasn’t One: Media and Architecture in America
By Joel McKim

Who’s Afraid of Red, Blue and Yellow?
By Sam Smiles

Water Lilies and the Gesture of Melancholy: On Monet’s Late Works
By Bente Larsen

Adorno and the Problem of Late Style
By Sven-Olov Wallenstein

The Multiple University and the Heroism of Forms: Variations on an Infinite Autonomy
By Stéphane Douailler

Adventures in the Sausage Factory: A Cursory Overview of UK University Struggles, November 2010–2011
By Danny Hayward

Dutch Austerity and Free Academies: An Interview With Katja Diefenbach
By Karl Lydén