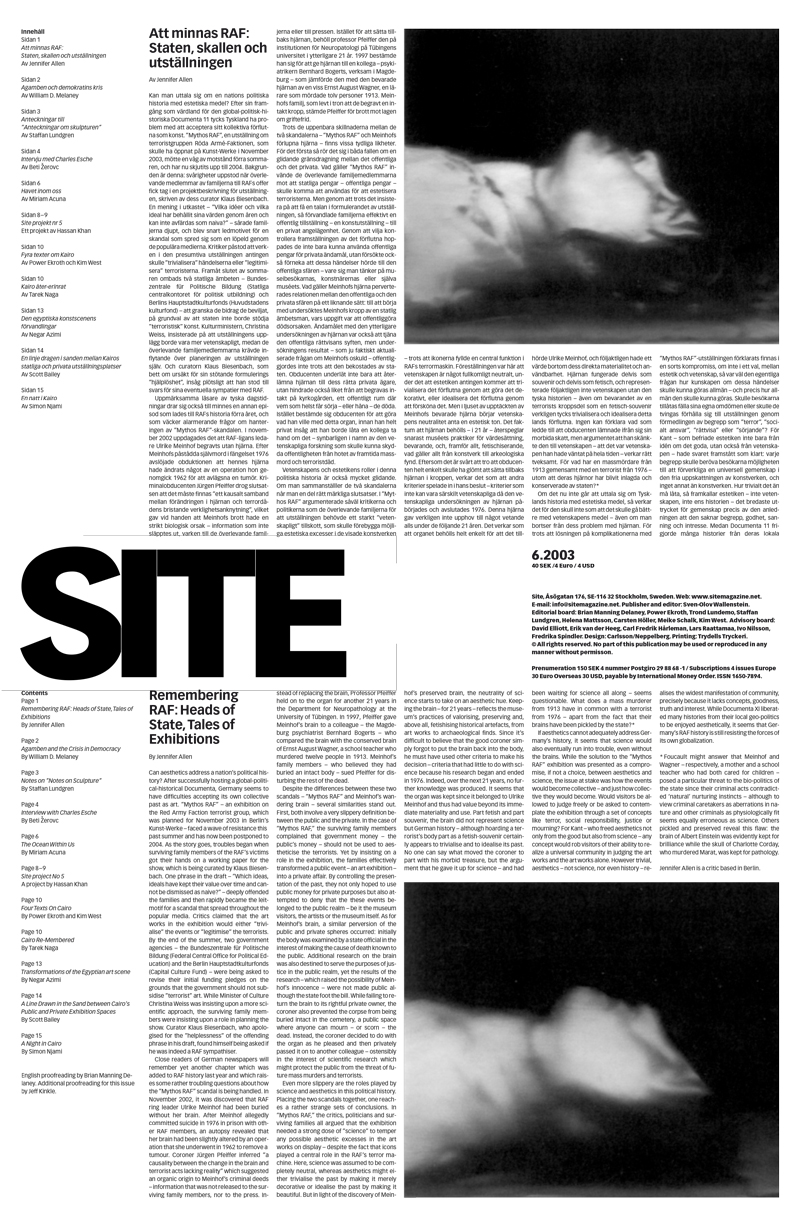 Cairo: Capital of Egypt, largest city not just in Africa, but also in the Arab World, with an estimated population of around 16–22 million (though presumably considerably higher) – a significant chunk of the country’s total population of 75 million. The city of Cairo is also a vital center of culture in the Middle East. Essentially all Arab hit music is produced here, as well as a significant share of Arab films. According to available data, the population of the country as a whole is 94% Muslims and 6% Copts. Egypt is a republic, but democratic elections have never been held. (President Mubarak has been in office since 1981.) The GNP is around $1300 per capita.

In the fall of 2002, a Swedish-Egyptian exchange project took place, which was to culminate in exhibitions in both Cairo and Stockholm. It was arranged in connection with the exhibition at the Townhouse Gallery in Cairo in October last year, when we, members of SITE, journeyed from Sweden to Cairo.

At that particular juncture in time, Afghanistan’s Taliban regime had long since fallen, while the invasion of Iraq was still another few months way. In the end, General Bush’s Holy Crusade was perhaps simply the heavy hand of fate, somewhere in the background of our visit to Cairo. That said, there is still reason to point out the obvious: that the world we encountered bore no resemblance to the polarizing image that motivates the wars in the Middle East. We met neither ”them” – i.e., the fanatical, anti-modern fundamentalist, terrorist threat – nor ”us,” i.e., the Christian, enlightened, and compassionately conservative advocates of liberalization. Here, like anywhere else, life takes place in the excluded middle of this rhetoric.

However much we can’t avoid the feeling of having looked in on Cairo “from without,” we can nonetheless note a few things about the city. One thing above all that can be remarked upon is that everything is present at the same time and the same place. Because of the extraordinarily vast history of Egypt, a bottomless pit opens up smack in the middle of the contemporary life of Cairo. Many of its inhabitants even claim that the city is marked by a ”pharaonic ego.” Staying near the surface of the yawning chasm of the past, we see that Nasser’s new way and Sadat’s conservatism have left their mark deeply. Muslims, Jews and Christians; fundamentalists and the secularized; outcasts and the filthy rich, all live side by side. And, in parallel with an oppressed sexuality one tries to hold at a distance with taboos, as well as the sobriety dictated by the Koran, belly-dancing and nightclubs flourish.

Excerpt from "Four Texts On Cairo" by Power Ekroth and Kim West.

Agamben and the Crisis in Democracy
By William D. Melaney

Notes on ”Notes on Sculpture”
By Staffan Lundgren

The Ocean Within Us
By Miriam Acuna

Site project No 5 a project
By Hassan Khan

Four Texts On Cairo
By Power Ekroth and Kim West

Transformations of the Egyptian art scene
By Negar Azimi

A Night in Cairo
By Simon Njamie