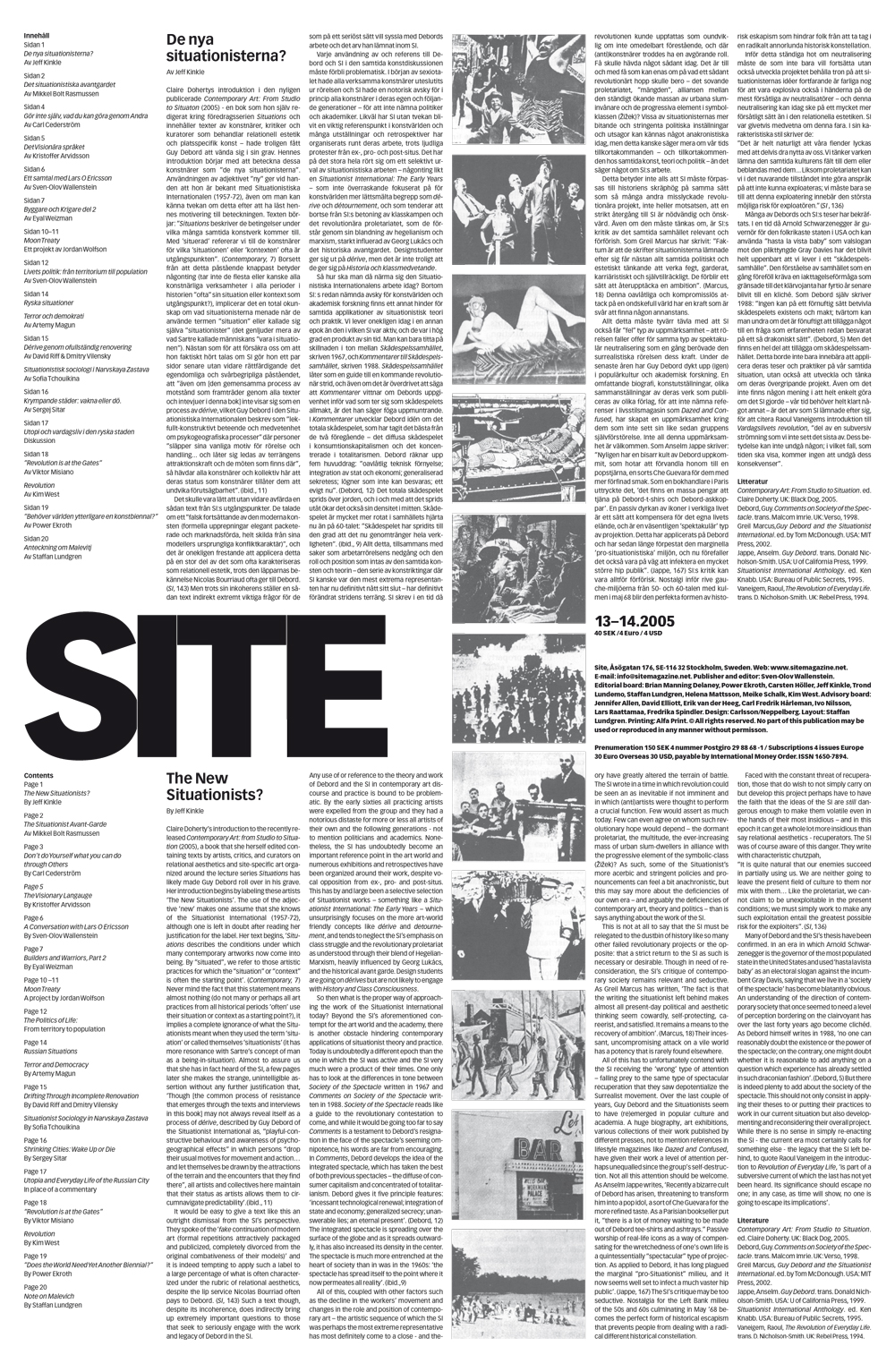 Claire Doherty’s introduction to the recently released Contemporary Art: from Studio to Situation (2005), a book that she herself edited containing texts by artists, critics, and curators on relational aesthetics and site-specific art organized around the lecture series Situations has likely made Guy Debord roll over in his grave. Her introduction begins by labeling these artists ‘The New Situationists’. The use of the adjective ‘new’ makes one assume that she knows of the Situationist International (1957-72), although one is left in doubt after reading her justification for the label. Her text begins, ‘Situations describes the conditions under which many contemporary artworks now come into being.

By “situated”, we refer to those artistic practices for which the “situation” or “context” is often the starting point’. (Contemporary, 7) Never mind the fact that this statement means almost nothing (do not many or perhaps all art practices from all historical periods ‘often’ use their situation or context as a starting point?), it implies a complete ignorance of what the Situationists meant when they used the term ‘situation’ or called themselves ‘situationists’ (it has more resonance with Sartre’s concept of man as a being-in-situation). Almost to assure us that she has in fact heard of the SI, a few pages later she makes the strange, unintelligible assertion without any further justification that, ‘Though [the common process of resistance that emerges through the texts and interviews in this book] may not always reveal itself as a process of dérive, described by Guy Debord of the Situationist International as, “playful-constructive behaviour and awareness of psychogeographical effects” in which persons “drop their usual motives for movement and action… and let themselves be drawn by the attractions of the terrain and the encounters that they find there”, all artists and collectives here maintain that their status as artists allows them to circumnavigate predictability’.(ibid., 11)

Excerpt from "The New Situationists?" by Jeff Kinkle.

The New Situationists?
By Jeff Kinkle

The Visionary Langauge
By Kristoffer Arvidsson

A Conversation with Lars O Ericsson
By Sven-Olov Wallenstein

A project by Jordan Wolfson
The Politics of Life:

Drifting Through Incomplete Renovation
By David Riff and Dmitry Vilensky

Shrinking Cities: Wake Up or Die
By Sergey Sitar

“Revolution is at the Gates”
By Viktor Misiano

”Does the World Need Yet Another Biennial?”
By Power Ekroth

Note on Malevich
By Staffan Lundgren