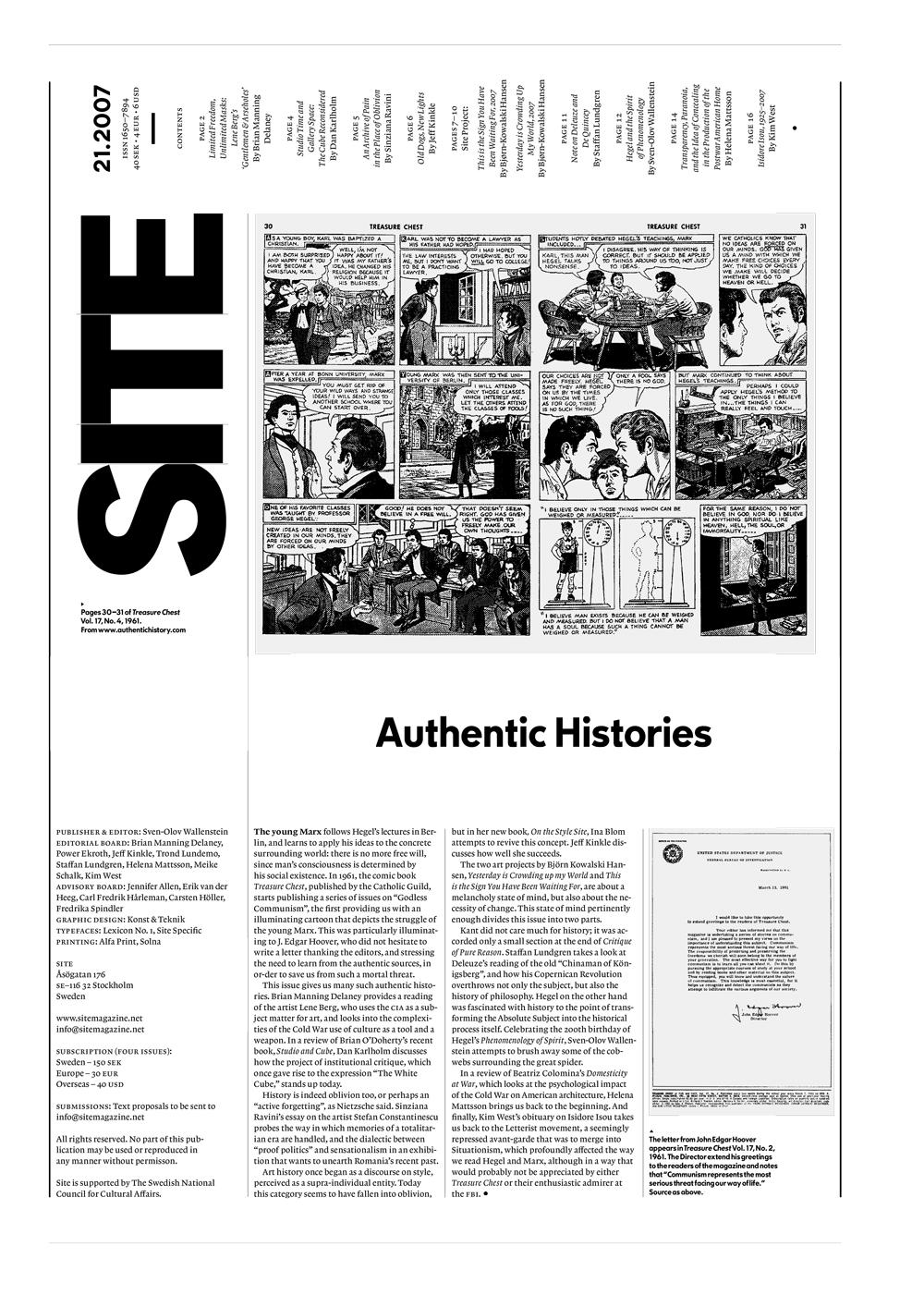 The young Marx follows Hegel’s lectures in Berlin, and learns to apply his ideas to the concrete surrounding world: there is no more free will, since man’s consciousness is determined by his social existence. In 1961, the comic book Treasure Chest, published by the Catholic Guild, starts publishing a series of issues on “Godless Communism”, the first providing us with an illuminating cartoon that depicts the struggle of the young Marx. This was particularly illuminating to J. Edgar Hoover, who did not hesitate to write a letter thanking the editors, and stressing the need to learn from the authentic sources, in or-der to save us from such a mortal threat.

This issue gives us many such authentic histories. Brian Manning Delaney provides a reading of the artist Lene Berg, who uses the cia as a subject matter for art, and looks into the complexities of the Cold War use of culture as a tool and a weapon. In a review of Brian O’Doherty’s recent book, Studio and Cube, Dan Karlholm discusses how the project of institutional critique, which once gave rise to the expression “The White Cube,” stands up today.

History is indeed oblivion too, or perhaps an “active forgetting”, as Nietzsche said. Sinziana Ravini’s essay on the artist Stefan Constantinescu probes the way in which memories of a totalitarian era are handled, and the dialectic between “proof politics” and sensationalism in an exhibition that wants to unearth Romania’s recent past.

Art history once began as a discourse on style, perceived as a supra-individual entity. Today this category seems to have fallen into oblivion, but in her new book, On the Style Site, Ina Blom attempts to revive this concept. Jeff Kinkle discusses how well she succeeds.

The two art projects by Björn Kowalski Hansen, Yesterday is Crowding up my World and This is the Sign You Have Been Waiting For, are about a melancholy state of mind, but also about the necessity of change. This state of mind pertinently enough divides this issue into two parts.

Kant did not care much for history; it was accorded only a small section at the end of Critique of Pure Reason. Staffan Lundgren takes a look at Deleuze’s reading of the old “Chinaman of Königsberg”, and how his Copernican Revolution overthrows not only the subject, but also the history of philosophy. Hegel on the other hand was fascinated with history to the point of transforming the Absolute Subject into the historical process itself. Celebrating the 200th birthday of Hegel’s Phenomenology of Spirit, Sven-Olov Wallenstein attempts to brush away some of the cobwebs surrounding the great spider.

In a review of Beatriz Colomina’s Domesticity at War, which looks at the psychological impact of the Cold War on American architecture, Helena Mattsson brings us back to the beginning. And finally, Kim West’s obituary on Isidore Isou takes us back to the Letterist movement, a seemingly repressed avant-garde that was to merge into Situationism, which profoundly affected the way we read Hegel and Marx, although in a way that would probably not be appreciated by either Treasure Chest or their enthusiastic admirer at the FBI.

Site Project: This is the Sign You Have Been Waiting For, 2007
By Bjørn-Kowalski Hansen

Yesterday is Crowding Up My World, 2007
By Bjørn-Kowalski Hansen

Note on Deleuze and De Quincey
By Staffan Lundgren

Hegel and the Spirit of Phenomenology
By Sven-Olov Wallenstein

Transparency, Paranoia, and the Idea of Concealing in the Production of the Postwar American Home
By Helena Mattsson