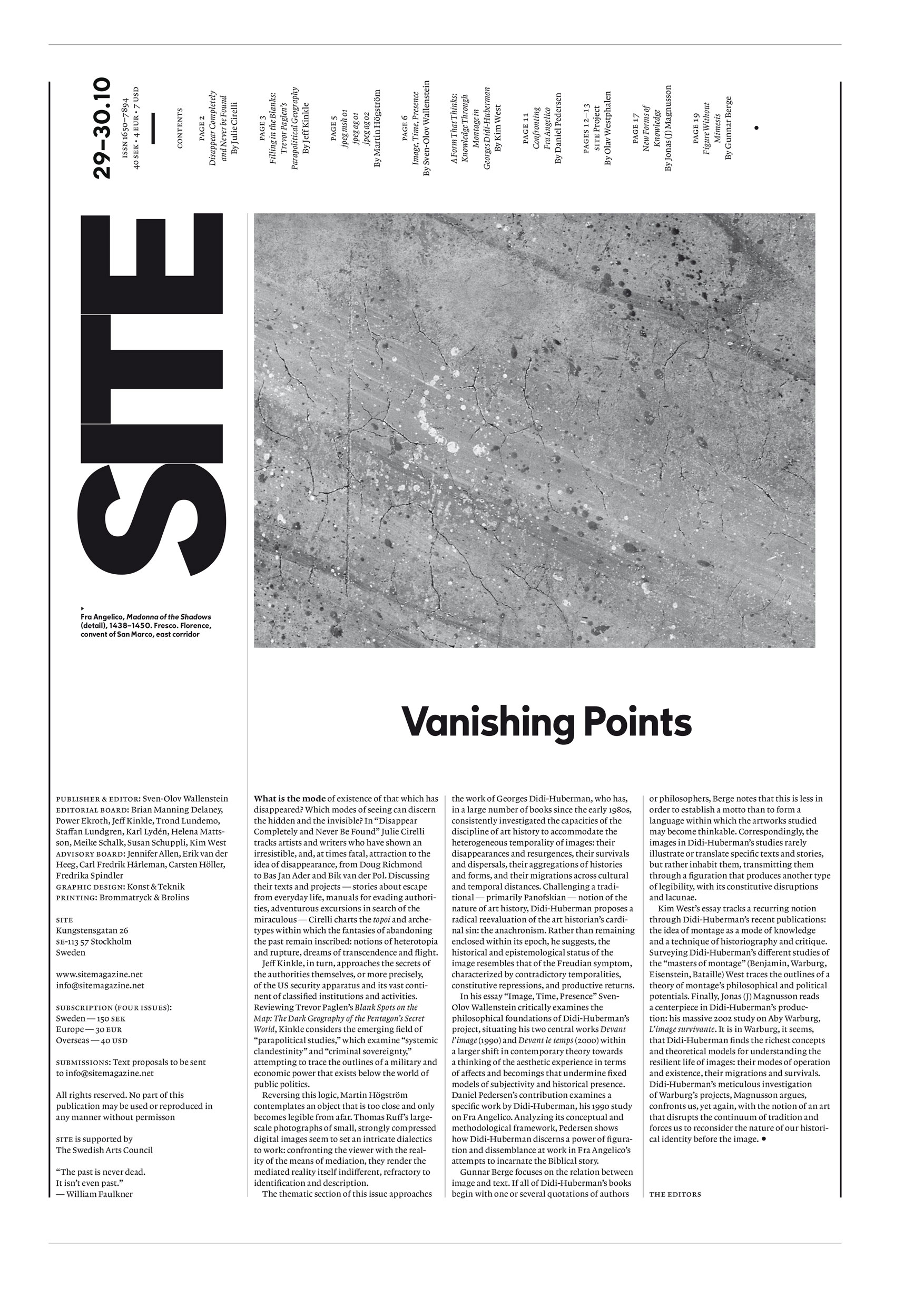 What is the mode of existence of that which has disappeared? Which modes of seeing can discern the hidden and the invisible? In “Disappear Completely and Never Be Found” Julie Cirelli tracks artists and writers who have shown an irresistible, and, at times fatal, attraction to the idea of disappearance, from Doug Richmond to Bas Jan Ader and Bik van der Pol. Discussing their texts and projects — stories about escape from everyday life, manuals for evading authorities, adventurous excursions in search of the miraculous — Cirelli charts the topoi and archetypes within which the fantasies of abandoning the past remain inscribed: notions of heterotopia and rupture, dreams of transcendence and flight.

Jeff Kinkle, in turn, approaches the secrets of the authorities themselves, or more precisely, of the US security apparatus and its vast continent of classified institutions and activities. Reviewing Trevor Paglen’s Blank Spots on the Map: The Dark Geography of the Pentagon’s Secret World, Kinkle considers the emerging field of “parapolitical studies,” which examine “systemic clandestinity” and “criminal sovereignty,” attempting to trace the outlines of a military and economic power that exists below the world of public politics.

Reversing this logic, Martin Högström contemplates an object that is too close and only becomes legible from afar. Thomas Ruff’s largescale photographs of small, strongly compressed digital images seem to set an intricate dialectics to work: confronting the viewer with the reality of the means of mediation, they render the mediated reality itself indifferent, refractory to identification and description.

The thematic section of this issue approaches the work of Georges Didi-Huberman, who has, in a large number of books since the early 1980s, consistently investigated the capacities of the discipline of art history to accommodate the heterogeneous temporality of images: their disappearances and resurgences, their survivals and dispersals, their aggregations of histories and forms, and their migrations across cultural and temporal distances. Challenging a traditional — primarily Panofskian — notion of the nature of art history, Didi-Huberman proposes a radical reevaluation of the art historian’s cardinal sin: the anachronism. Rather than remaining enclosed within its epoch, he suggests, the historical and epistemological status of the image resembles that of the Freudian symptom, characterized by contradictory temporalities, constitutive repressions, and productive returns.

In his essay “Image, Time, Presence” Sven- Olov Wallenstein critically examines the philosophical foundations of Didi-Huberman’s project, situating his two central works Devant l’image (1990) and Devant le temps (2000) within a larger shift in contemporary theory towards a thinking of the aesthetic experience in terms of affects and becomings that undermine fixed models of subjectivity and historical presence. Daniel Pedersen’s contribution examines a specific work by Didi-Huberman, his 1990 study on Fra Angelico. Analyzing its conceptual and methodological framework, Pedersen shows how Didi-Huberman discerns a power of figuration and dissemblance at work in Fra Angelico’s attempts to incarnate the Biblical story.

Gunnar Berge focuses on the relation between image and text. If all of Didi-Huberman’s books begin with one or several quotations of authors or philosophers, Berge notes that this is less in order to establish a motto than to form a language within which the artworks studied may become thinkable. Correspondingly, the images in Didi-Huberman’s studies rarely illustrate or translate specific texts and stories, but rather inhabit them, transmitting them through a figuration that produces another type of legibility, with its constitutive disruptions and lacunae.

Kim West’s essay tracks a recurring notion through Didi-Huberman’s recent publications: the idea of montage as a mode of knowledge and a technique of historiography and critique. Surveying Didi-Huberman’s different studies of the “masters of montage” (Benjamin, Warburg, Eisenstein, Bataille) West traces the outlines of a theory of montage’s philosophical and political potentials. Finally, Jonas (J) Magnusson reads a centerpiece in Didi-Huberman’s production: his massive 2002 study on Aby Warburg, L’image survivante. It is in Warburg, it seems, that Didi-Huberman finds the richest concepts and theoretical models for understanding the resilient life of images: their modes of operation and existence, their migrations and survivals. Didi-Huberman’s meticulous investigation of Warburg’s projects, Magnusson argues, confronts us, yet again, with the notion of an art that disrupts the continuum of tradition and forces us to reconsider the nature of our historical identity before the image.

Disappear Completely and Never be Found
By Julie Cirelli

A Form That Thinks: Knowledge Through Montage in Georges Didi-Huberman
By Kim West

Figure Without Mimesis
By Gunnar Berge