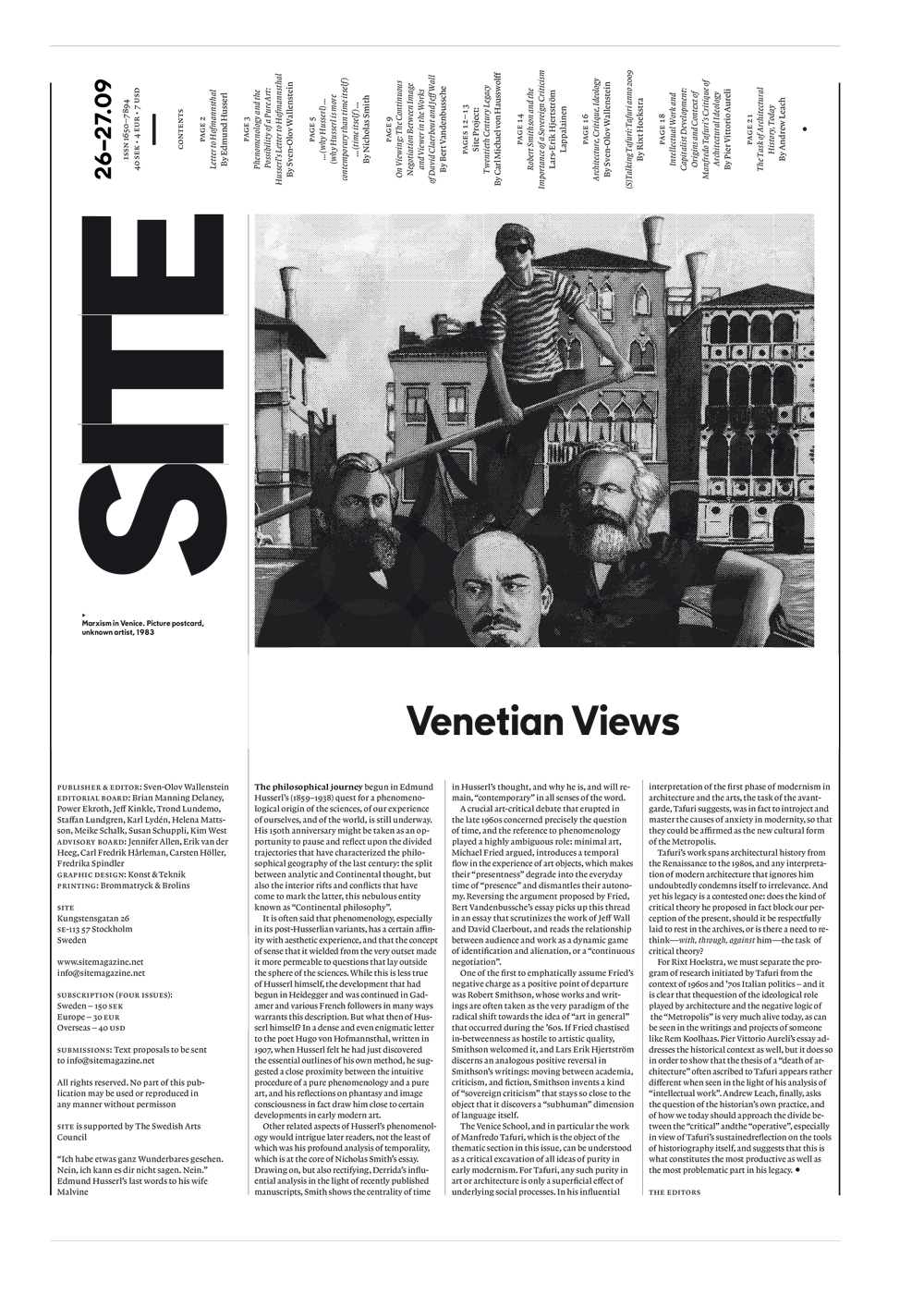 The philosophical journey begun in Edmund Husserl’s (1859–1938) quest for a phenomenological origin of the sciences, of our experience of ourselves, and of the world, is still underway. His 150th anniversary might be taken as an op-portunity to pause and reflect upon the divided trajectories that have characterized the philosophical geography of the last century: the split between analytic and Continental thought, but also the interior rifts and conflicts that have come to mark the latter, this nebulous entity known as “Continental philosophy”.

It is often said that phenomenology, especially in its post-Husserlian variants, has a certain affinity with aesthetic experience, and that the concept of sense that it wielded from the very outset made it more permeable to questions that lay outside the sphere of the sciences. While this is less true of Husserl himself, the development that had begun in Heidegger and was continued in Gadamer and various French followers in many ways warrants this description. But what then of Husserl himself? In a dense and even enigmatic letter to the poet Hugo von Hofmannsthal, written in 1907, when Husserl felt he had just discovered the essential outlines of his own method, he suggested a close proximity between the intuitive procedure of a pure phenomenology and a pure art, and his reflections on phantasy and image consciousness in fact draw him close to certain developments in early modern art.

Other related aspects of Husserl’s phenomenology would intrigue later readers, not the least of which was his profound analysis of temporality, which is at the core of Nicholas Smith’s essay. Drawing on, but also rectifying, Derrida’s influential analysis in the light of recently published manuscripts, Smith shows the centrality of time in Husserl’s thought, and why he is, and will re-main, “contemporary” in all senses of the word.

A crucial art-critical debate that erupted in the late 1960s concerned precisely the question of time, and the reference to phenomenology played a highly ambiguous role: minimal art, Michael Fried argued, introduces a temporal flow in the experience of art objects, which makes their “presentness” degrade into the everyday time of “presence” and dismantles their autonomy. Reversing the argument proposed by Fried, Bert Vandenbussche’s essay picks up this thread in an essay that scrutinizes the work of Jeff Wall and David Claerbout, and reads the relationship between audience and work as a dynamic game of identification and alienation, or a “continuous negotiation”.One of the first to emphatically assume Fried’s negative charge as a positive point of departure was Robert Smithson, whose works and writings are often taken as the very paradigm of the radical shift towards the idea of “art in general” that occurred during the ’60s. If Fried chastised in-betweenness as hostile to artistic quality, Smithson welcomed it, and Lars Erik Hjertström discerns an analogous positive reversal in Smithson’s writings: moving between academia, criticism, and fiction, Smithson invents a kind of “sovereign criticism” that stays so close to the object that it discovers a “subhuman” dimension of language itself.

The Venice School, and in particular the work of Manfredo Tafuri, which is the object of the thematic section in this issue, can be understood as a critical excavation of all ideas of purity in early modernism. For Tafuri, any such purity in art or architecture is only a superficial effect of underlying social processes. In his influential interpretation of the first phase of modernism in architecture and the arts, the task of the avantgarde, Tafuri suggests, was in fact to introject and master the causes of anxiety in modernity, so that they could be affirmed as the new cultural form of the Metropolis.

Tafuri’s work spans architectural history from the Renaissance to the 1980s, and any interpretation of modern architecture that ignores him undoubtedly condemns itself to irrelevance. And yet his legacy is a contested one: does the kind of critical theory he proposed in fact block our per-ception of the present, should it be respectfully laid to rest in the archives, or is there a need to re-think — with, through, against him —the task of critical theory?

For Rixt Hoekstra, we must separate the pro-gram of research initiated by Tafuri from the context of 1960s and ’70s Italian politics – and it is clear that thequestion of the ideological role played by architecture and the negative logic of the “Metropolis” is very much alive today, as can be seen in the writings and projects of someone like Rem Koolhaas. Pier Vittorio Aureli’s essay addresses the historical context as well, but it does so in order to show that the thesis of a “death of architecture” often ascribed to Tafuri appears rather different when seen in the light of his analysis of “intellectual work”. Andrew Leach, finally, asks the question of the historian’s own practice, and of how we today should approach the divide between the “critical” andthe “operative”, especially in view of Tafuri’s sustainedreflection on the tools of historiography itself, and suggests that this is what constitutes the most productive as well as the most problematic part in his legacy.

Letter to Hofmannsthal
By Edmund Husserl

Phenomenology and the Possibility of a Pure Art: Husserl’s Letter to Hofmannsthal
By Sven-Olov Wallenstein

On Viewing: The Continuous Negotiation Between Image and Viewer in the Works of David Claerbout and Jeff Wall
By Bert Vandenbussche

The Task of Architectural History, Today
By Andrew Leach