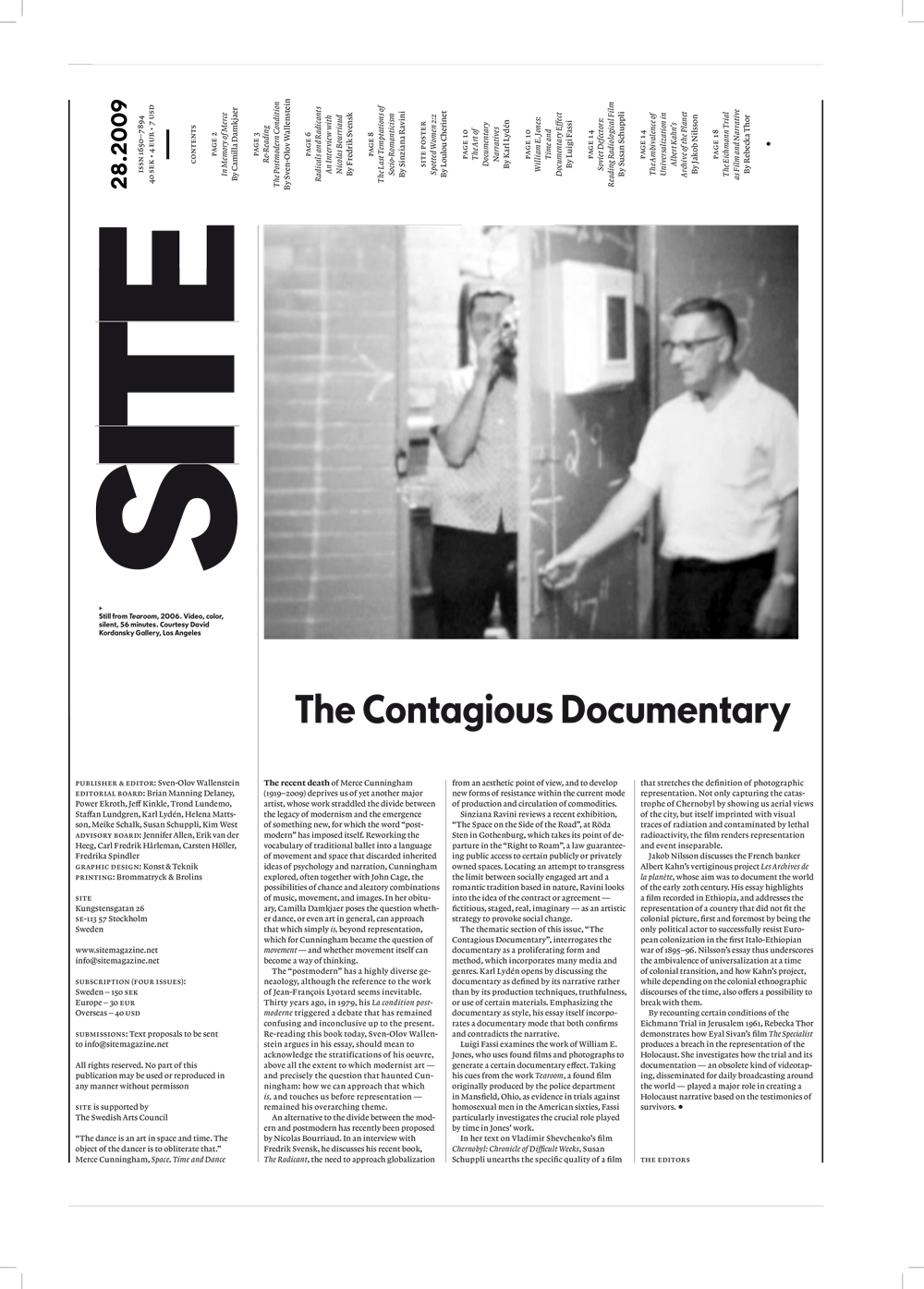 The recent death of Merce Cunningham (1919–2009) deprives us of yet another major artist, whose work straddled the divide between the legacy of modernism and the emergence of something new, for which the word “postmodern” has imposed itself. Reworking the vocabulary of traditional ballet into a language of movement and space that discarded inherited ideas of psychology and narration, Cunningham explored, often together with John Cage, the possibilities of chance and aleatory combinations of music, movement, and images. In her obituary, Camilla Damkjaer poses the question whether dance, or even art in general, can approach that which simply is, beyond representation, which for Cunningham became the question of movement — and whether movement itself can become a way of thinking.

The “postmodern” has a highly diverse geneaology, although the reference to the work of Jean-François Lyotard seems inevitable. Thirty years ago, in 1979, his La condition postmoderne triggered a debate that has remained confusing and inconclusive up to the present. Re-reading this book today, Sven-Olov Wallenstein argues in his essay, should mean to acknowledge the stratifications of his oeuvre, above all the extent to which modernist art — and precisely the question that haunted Cunningham: how we can approach that which is, and touches us before representation — remained his overarching theme.

An alternative to the divide between the modern and postmodern has recently been proposed by Nicolas Bourriaud. In an interview with Fredrik Svensk, he discusses his recent book, The Radicant, the need to approach globalization from an aesthetic point of view, and to develop new forms of resistance within the current mode of production and circulation of commodities.

Sinziana Ravini reviews a recent exhibition, “The Space on the Side of the Road”, at Röda Sten in Gothenburg, which takes its point of departure in the “Right to Roam”, a law guaranteeing public access to certain publicly or privately owned spaces. Locating an attempt to transgress the limit between socially engaged art and a romantic tradition based in nature, Ravini looks into the idea of the contract or agreement — fictitious, staged, real, imaginary — as an artistic strategy to provoke social change.

Luigi Fassi examines the work of William E. Jones, who uses found films and photographs to generate a certain documentary effect. Taking his cues from the work Tearoom, a found film originally produced by the police department in Mansfield, Ohio, as evidence in trials against homosexual men in the American sixties, Fassi particularly investigates the crucial role played by time in Jones’ work.

In her text on Vladimir Shevchenko’s film Chernobyl: Chronicle of Difficult Weeks, Susan Schuppli unearths the specific quality of a film that stretches the definition of photographic representation. Not only capturing the catastrophe of Chernobyl by showing us aerial views of the city, but itself imprinted with visual traces of radiation and contaminated by lethal radioactivity, the film renders representation and event inseparable.

Jakob Nilsson discusses the French banker Albert Kahn’s vertiginous project Les Archives de la planète, whose aim was to document the world of the early 20th century. His essay highlights a film recorded in Ethiopia, and addresses the representation of a country that did not fit the colonial picture, first and foremost by being the only political actor to successfully resist European colonization in the first Italo-Ethiopian war of 1895–96. Nilsson’s essay thus underscores the ambivalence of universalization at a time of colonial transition, and how Kahn’s project, while depending on the colonial ethnographic discourses of the time, also offers a possibility to break with them.

By recounting certain conditions of the Eichmann Trial in Jerusalem 1961, Rebecka Thor demonstrates how Eyal Sivan’s film The Specialist produces a breach in the representation of the Holocaust. She investigates how the trial and its documentation — an obsolete kind of videotaping, disseminated for daily broadcasting around the world — played a major role in creating a Holocaust narrative based on the testimonies of survivors.

In Memory of Merce
By Camilla Damkjaer

The Postmodern Condition
By Sven-Olov Wallenstein

Radicals and Radicants
An Interview with Nicolas Bourriaud
By Fredrik Svensk

The Art of Documentary Narratives
By Karl Lydén

The Eichmann Trial as Film and Narrative
By Rebecka Thor