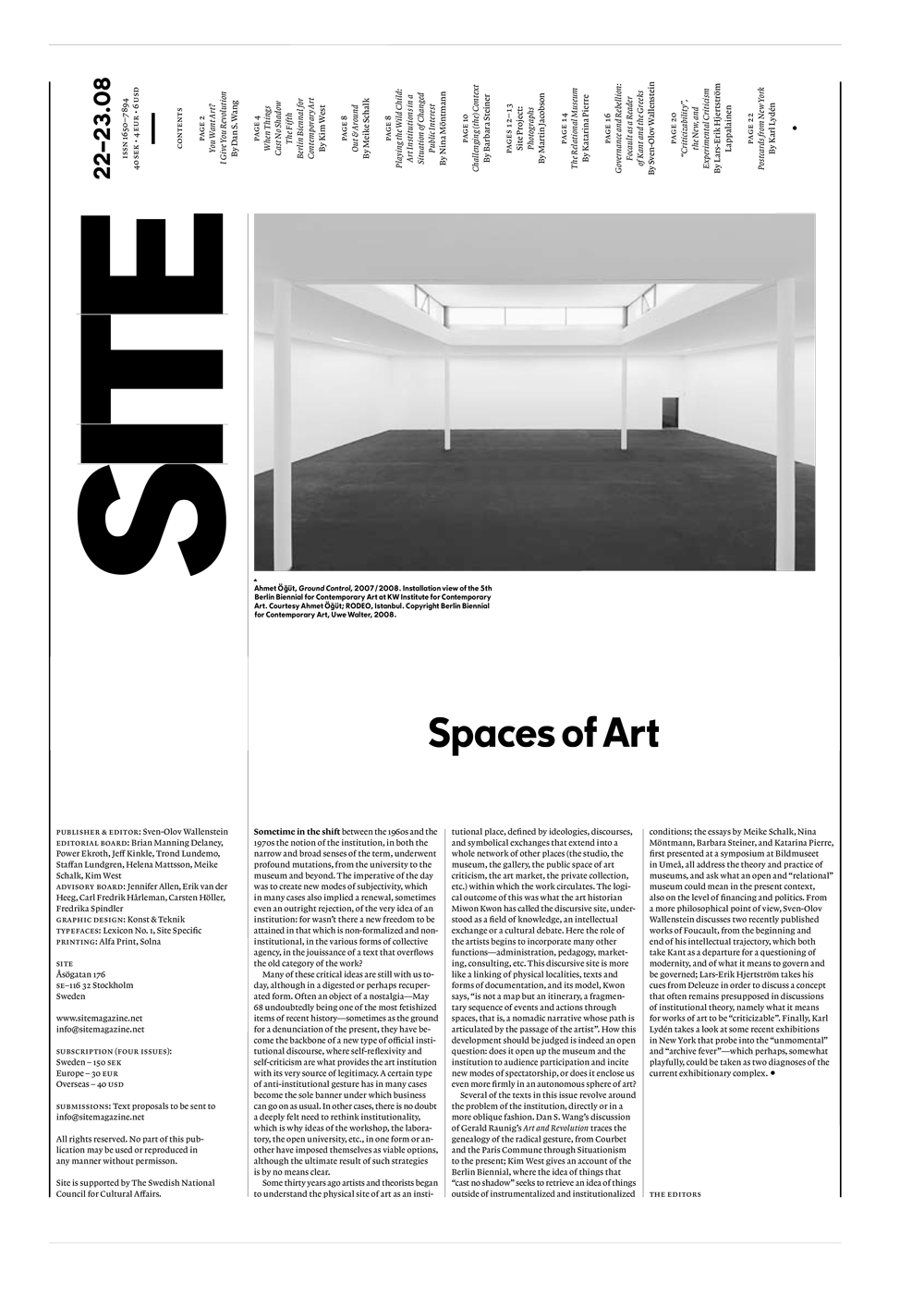 Sometime in the shift between the 1960s and the 1970s the notion of the institution, in both the narrow and broad senses of the term, underwent profound mutations, from the university to the museum and beyond. The imperative of the day was to create new modes of subjectivity, which in many cases also implied a renewal, sometimes even an outright rejection, of the very idea of an institution: for wasn’t there a new freedom to be attained in that which is non-formalized and noninstitutional, in the various forms of collective agency, in the jouissance of a text that overflows the old category of the work?

Many of these critical ideas are still with us today, although in a digested or perhaps recuperated form. Often an object of a nostalgia—May 68 undoubtedly being one of the most fetishized items of recent history—sometimes as the ground for a denunciation of the present, they have become the backbone of a new type of official institutional discourse, where self-reflexivity and self-criticism are what provides the art institution with its very source of legitimacy. A certain type of anti-institutional gesture has in many cases become the sole banner under which business can go on as usual. In other cases, there is no doubt a deeply felt need to rethink institutionality, which is why ideas of the workshop, the laboratory, the open university, etc., in one form or another have imposed themselves as viable options, although the ultimate result of such strategies is by no means clear.

Some thirty years ago artists and theorists began to understand the physical site of art as an institutional place, defined by ideologies, discourses, and symbolical exchanges that extend into a whole network of other places (the studio, the museum, the gallery, the public space of art criticism, the art market, the private collection, etc.) within which the work circulates. The logical outcome of this was what the art historian Miwon Kwon has called the discursive site, understood as a field of knowledge, an intellectual exchange or a cultural debate. Here the role of the artists begins to incorporate many other functions—administration, pedagogy, marketing, consulting, etc. This discursive site is more like a linking of physical localities, texts and forms of documentation, and its model, Kwon says, “is not a map but an itinerary, a fragmentary sequence of events and actions through spaces, that is, a nomadic narrative whose path is articulated by the passage of the artist”. How this development should be judged is indeed an open question: does it open up the museum and the institution to audience participation and incite new modes of spectatorship, or does it enclose us even more firmly in an autonomous sphere of art?

Several of the texts in this issue revolve around the problem of the institution, directly or in a more oblique fashion. Dan S. Wang’s discussion of Gerald Raunig’s Art and Revolution traces the genealogy of the radical gesture, from Courbet and the Paris Commune through Situationism to the present; Kim West gives an account of the Berlin Biennial, where the idea of things that “cast no shadow” seeks to retrieve an idea of things outside of instrumentalized and institutionalized conditions; the essays by Meike Schalk, Nina Möntmann, Barbara Steiner, and Katarina Pierre, first presented at a symposium at Bildmuseet in Umeå, all address the theory and practice of museums, and ask what an open and “relational” museum could mean in the present context, also on the level of financing and politics. From a more philosophical point of view, Sven-Olov Wallenstein discusses two recently published works of Foucault, from the beginning and end of his intellectual trajectory, which both take Kant as a departure for a questioning of modernity, and of what it means to govern and be governed; Lars-Erik Hjertström takes his cues from Deleuze in order to discuss a concept that often remains presupposed in discussions of institutional theory, namely what it means for works of art to be “criticizable”. Finally, Karl Lydén takes a look at some recent exhibitions in New York that probe into the “unmomental” and “archive fever”—which perhaps, somewhat playfully, could be taken as two diagnoses of the current exhibitionary complex.

You Want Art? I Give You Revolution
By Dan S. Wang

When Things Cast No Shadow: The Fifth Berlin Biennal for Contemporary Art
By Kim West

Out & Around
By Meike Schalk

Playing the Wild Child: Art Institutions in a Situation of Changed Public Interest
By Nina Möntmann

Challenging (the) Context
By Barbara Steiner

The Relational Museum
By Katarina Pierre

Governance and Rebellion: Focault as a Reader of Kant and the Greeks
By Sven-Olov Wallenstein

“Criticizability”, the New, and Experimental Criticism
By Lars-Erik Hjertström Lappalainen