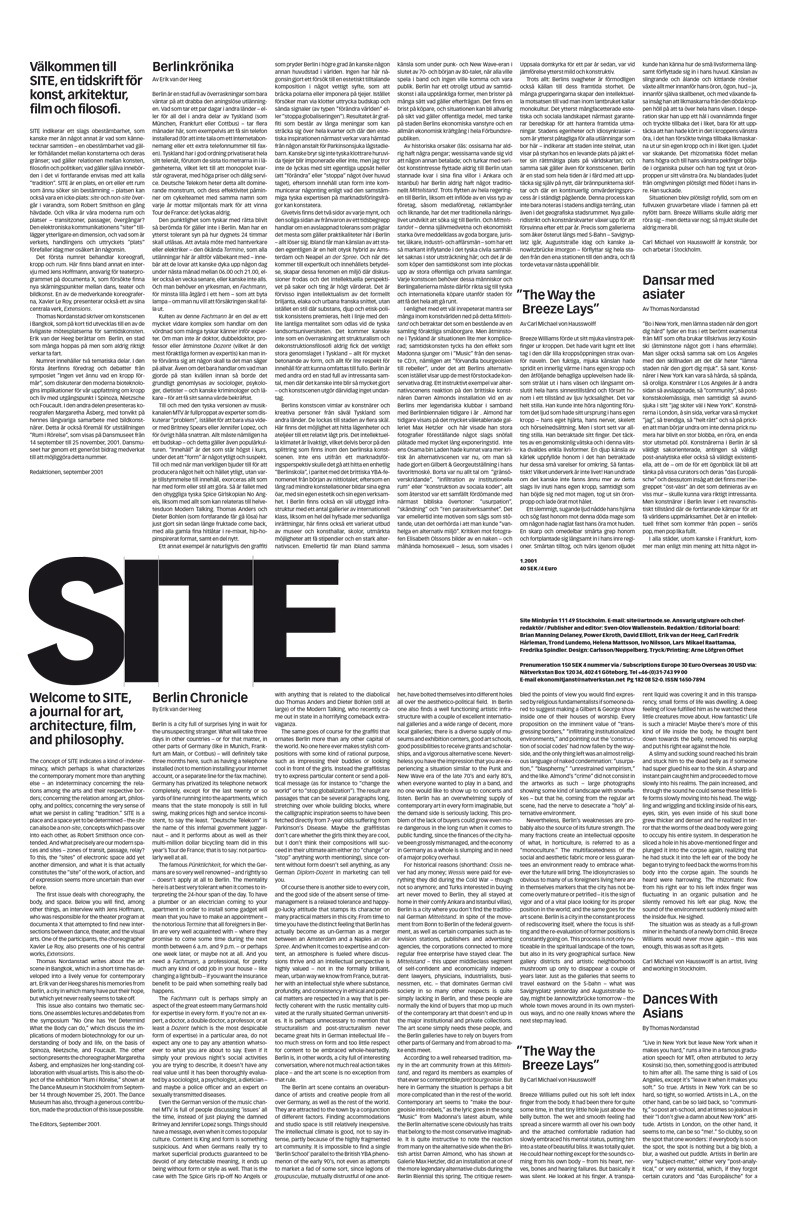 The concept of SITE indicates a kind of indeterminacy, which perhaps is what characterizes the contemporary moment more than anything else – an indeterminacy concerning the relations among the arts and their respective borders; concerning the relation among art, philosophy, and politics; concerning the very sense of what we persist in calling “tradition.” SITE is a place and a space yet to be determined – the site can also be a non-site, concepts which pass over into each other, as Robert Smithson once contended. And what precisely are our modern spaces and sites – zones of transit, passage, relay? To this, the “sites” of electronic space add yet another dimension, and what it is that actually constitutes the “site” of the work, of action, and of expression seems more uncertain than ever before.

The first issue deals with choreography, the body, and space. Below you will find, among other things, an interview with Jens Hoffmann, who was responsible for the theater program at documenta X that attempted to find new intersections between dance, theater, and the visual arts. One of the participants, the choreographer Xavier Le Roy, also presents one of his central works, Extensions. Thomas Nordanstad writes about the art scene in Bangkok, which in a short time has developed into a lively venue for contemporary art. Erik van der Heeg shares his memories from Berlin, a city in which many have put their hope, but which yet never really seems to take off.

This issue also contains two thematic sections. One assembles lectures and debates from the symposium “No One has Yet Determind What the Body can do,” which discuss the implications of modern biotechnology for our understanding of body and life, on the basis of Spinoza, Nietzsche, and Foucault. The other section presents the choreographer Margaretha Åsberg, and emphasizes her long-standing collaboration with visual artists. This is also the object of the exhibition “Rum i Rörelse,” shown at The Dance Museum in Stockholm from September 14 through November 25, 2001. The Dance Museum has also, through a generous contribution, made the production of this issue possible.

The way the Breeze Lays
By Carl Michael von Hausswolff

Dances with Asians
By Thomas Nordanstad

Art Criticism Now and Then
By Eva-Lotta Holm Flach

Police and Biopolitics
By Kim West

"No one has yet determined what the body can do"
Spinoza, Ethics Book III

Spinoza: What Can A Body Do?
By Fredrika Spindler

Putting the Body in the Place of the Soul, What Does This Change? Nietzsche between Descartes, Kant and Biology
By Barbara Stiegler

Foucault and Biopolitics
By Sven-Olov Wallenstein

Dietary Masochism, Desire, and the Future of the Body
By Brian Manning Delaney

Discussion: The Subject After Man?